So I'm gradually getting into a good rhythm with these posts on my blog; every Tuesday I should have a new one.

The other day I finally released the new Shadow Man article on TalonBrave.info, you can find it here. As usual I'm left wondering how many have actually enjoyed the article and how many have read it, it's really hard to get any sort of feedback. It doesn't help that it just drops into such a small circle of people as well.

There's always some doubt when I release these, which is probably why the releases have been harder and harder. I don't know if there's really any value in what I'm doing. Still really would love to find someone interested in teaming up and contributing to the whole thing as well - I sort of hate feeling like a one-man band.

I'm not 100% certain if I'll do another part at this stage, given my motivation, but we'll see. Kicked myself after it was published for failing to mention a couple of things, such as the fact that the prototype released has support for playing music from an audio CD - and that one of the developers suggested there was supposed to be music in the prototype. Argh. It's something I really need to look into a bit more; is there another copy of the prototype with the music somewhere out there?

Besides the article though, this week I've been back to work. It won't impact much as I was still pretty busy with other projects over the Christmas holiday, but you know, worth mentioning I suppose as I certainly won't be as active online again.

SO, let's talk about some good exciting things! I've decided to put a number of projects on the shelf for the time being (okay that's probably not that good) - this includes a simulation project I'd been working on for the last year, and had existed in different forms for the last 5 or so years, and a modification I was developing for Half-Life - so I can focus on both Yin and a rather simplistic game I've been creating in Game Maker.

I was hesitant on using Game Maker for the longest time because I'm not typically a huge fan of 2D games myself and I'd always had the impression that there was some weird stigma towards people that used it. Well whatever.

Currently the game is just called Warlock. I don't want to talk too much about the gameplay yet as it's somewhat of a surprise I suppose but it's heavily inspired by an idea I had many years ago. I've just been so fed up with not being able to put a concept into motion that I've decided to focus a lot of my effort towards this.

That said, I'm not the best pixel artist in the world... You can see some various mock-ups of the main character below. Visually the intention is to make something inspired by games on the ZX Spectrum, but with a bit less colour clashing and a little bit more colour.

And some pretty poor attempts at a run cycle. 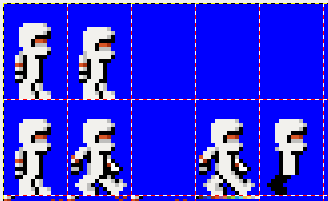 I've also implemented some simple lighting, bloom and a scanline effect, including some basic behaviours in the game as well.

I know, ew, but I'm hoping with a bit of work I can get it to look really nice.

Probably one of my few serious gripes with Game Maker is it creating virtual drives and then not cleaning them up. I think unchecking this setting will disable it though for anyone else that doesn't want it doing that.

As for Yin, I haven't made much more progress on the editor as of late beyond making a little start on updating the 2D views to finally support other directions, nothing to show of that though.

That said, I did give the console a bit more TLC, with better handling for entries that use multiple lines, displaying shadowed text for better readibility and colour!

And that's all I've got for today.